Borneo is home to many species of small carnivore. By “small carnivore”, we mean all small-bodied members of the order Carnivora, that is, all Bornean species of that order excepting Sun Bear Helarctos malayanus and Sunda Clouded Leopard Neofelis diardi. Hence, “small carnivores” here include species like civets, mongooses, otters, weasels and wild cats.

Many of Borneo’s small carnivores are endemic, meaning they are found nowhere else in the world. Unfortunately, endemic species are often threatened and vulnerable to extinction, especially if there are changes to their natural habitat. 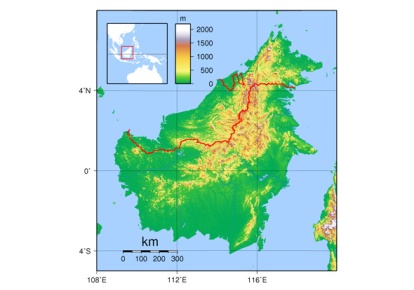 Why are small carnivores important and why should we protect and conserve them?

Like the nuts and bolts of a well-oiled machine, every living creature plays an important role in keeping the ecosystem alive and functioning; once we start losing these nuts and bolts or they stop functioning properly, it will only be a matter of time before the whole machine stops working and collapses. In most cases, these “nuts and bolts” are irreplaceable as they are the result of millions of years of evolution and fit seamlessly into their respective roles. Once we lose them, we lose millions of years of evolutionary fine-tuning at work.

Small carnivores play an important ecological role in the Bornean rainforest. For example:

In this sense, small carnivores have cascading effects on the entire forest trophic system and play a vital role in forest regeneration.

Despite their importance to Bornean rainforests, carnivores, and in particular, small carnivores, remain largely understudied; in most cases, scientists still have a long way to go in understanding the specific roles these species play in ecosystem dynamics. In fact, for most Bornean small carnivores, even the most basic data such as activity patterns, distribution and coarse abundance, are still non-existent, particularly in the Malaysian state of Sarawak, with few systematic studies having been undertaken to date.

Why is so little known about small carnivores in Borneo?

Research efforts in Borneo to date have primarily targeted larger, more “charismatic” species such as the orang-utan and elephant. One reason for this is the publicity, in a marketing sense, such flagship species provide to donors for funding such research. Studies that target such charismatic species are important, as they help captivate the attention of the international audience; however, this means that less charismatic species, which are equally (if not more) in need of research and conservation efforts, simply go unnoticed. Small carnivores seem to lack the charismatic appeal needed to secure research funding. This, coupled with their cryptic, elusive nature and their occurrence at naturally low densities, leads them to be rarely studied, reaching its apogee with the Hose’s Civet, one of the world’s least known carnivores and an endemic to northern Borneo.

What needs to be done to protect small carnivores in Borneo?

To ensure the long term survival and protection of carnivores, an ecologically and economically sustainable, large-scale habitat management plan is needed. Whilst protected areas currently offer some protection to small carnivores in Borneo, these areas are often too small and too isolated from each other to ensure the continued existence of such rare and threatened species. To bridge this gap, forests falling outside the borders of protected areas need to be managed and utilized in a manner that ensures their capacity to support small carnivore populations is not compromised.

To this effect, logging concessions are increasingly being recognized as areas of key conservation importance due to their sheer geographical scale, and the notion that selectively logged forests, if managed properly, would be able to retain large tracts of forest in a near natural state. In Sarawak, protected areas make up just 4% of the total land area whereas more than 35% is earmarked for logging activities (Sarawak Forest Department, 1997). In cases such as this, the survival of carnivores very much depends on appropriate land management outside totally protected forests, such as in these logging concessions.

But how can logging concessions in Sarawak be sustainably managed to ensure carnivores subsist in them over the long term? Guidelines for the conservation of small carnivores in these logging concessions do not currently exist, because we know so little about these species, particularly their tolerance to human induced pressures such as logging. And because our knowledge about them is so limited, we have no idea how best to protect them, not only in our small, isolated protected areas, but more so, in the vast areas designated for logging.

Logging activity in the Upper Baram region of Sarawak

All illustrations courtesy of Steven Lejeune